We all Know Serena Owes the Apology.

Just two things before we get into this article:

Firstly, Serena is the GOAT in women’s singles tennis, no question.

Secondly, if facts hurt your feelings, then you probably don’t want to read this article.

I’m going to assume that if you’re reading this article, you know the rough ins and outs of what happened at the US Open Women’s singles tennis final between Serena Williams and Naomi Osaka.

If you’re still a little hazy, here’s what happened in what was ultimately the final set.

Serena Williams was given 3 code violations: one for coaching from the stands, one for racket abuse, and a third for verbal abuse to the umpire. For these she received a warning, a point penalty, and a game penalty respectively.

Throughout this Serena called the umpire a thief and a liar, accused him of being sexist, said that he owed her an apology, said she didn’t receive coaching, and that “I have a daughter and stand by what is right for her”

Serena went on to lose the match.

A crying Osaka, who idolised Williams, was crowned champion to a full stadium booing.

The Women’s Tennis Association (WTA) has come out and backed Serena’s claims of sexism in tennis whilst the International Tennis Federation (ITF) has come out and defended the umpire, Carlos Ramos, saying he acted with integrity and professionalism at all times.

We’ll go through these points in a bit, but first let’s look at the facts…

Were the code violations correctly enforced?

Let’s look at the ITF rules:

The “Point Penalty Schedule” is as follows:

Williams received a warning after her first violation for coaching (which her coach admitted to after the game). Williams then received a point penalty for the clear racquet abuse on court. She then finally received a game penalty for verbal abuse towards the umpire.

So yes, on all 3 counts the code violations were correctly enforced to the letter.

Now that we all know that all three code violations were correctly enforced, let’s move onto the juicy stuff: the claims by Williams and the WTA that these rules were only enforced on Williams because she is a woman and if it were a man playing, he probably would have gotten away with it.

So, there’s a double standard with men who get away with violations…

On the evidence from this US open alone, and other tournaments, there isn’t.

In the First round of this year’s US Open Fabio Fognini (a male) used horrible language against an umpire. The result? He was fined $96,000, kicked out of the tournament (he lost his match anyway), and has a potential Grand slam ban.

Also at this year’s US Open, Novak Djokovic was fined a first service for a violation that literally no one has ever been penalised for in the history of tennis. He took longer than 25 seconds to serve…. twice in one game! He then faulted his second service, lost the game, and his serve was broken.

At the 2016 Istanbul open Final, Grigor Dimitrov destroyed 3 Rackets in the final set and didn’t just lose a game, he defaulted the whole match for his violations.

After the match he shook the umpires hand. What a nice fellow.

It seems like the claims that men get away with code violations are somewhat disintegrating…..

Was the umpire Carlos Ramos too strict on Serena Williams?

Ramos is a ‘Gold Standard’ referee who has umpired a final at every Grand Slam and as well as an Olympic final. He has been chosen for these partly due to the fact that he is very consistent at enforcing the rules, especially with big names.

At times it could be said that umpires don’t enforce the rules against big names, but Ramos does and that’s exactly why he is chosen for high profile matches.

In the 2016 Rio Olympics men’s singles semi-final Andy Murray was given a code violation for an apparent insult hurled at Ramos.

At the 2016 French open Ramos gave out another code violation for coaching, this time to Venus Williams – Serena’s sister!

There’s three points to take away from Ramos’ history as an umpire. 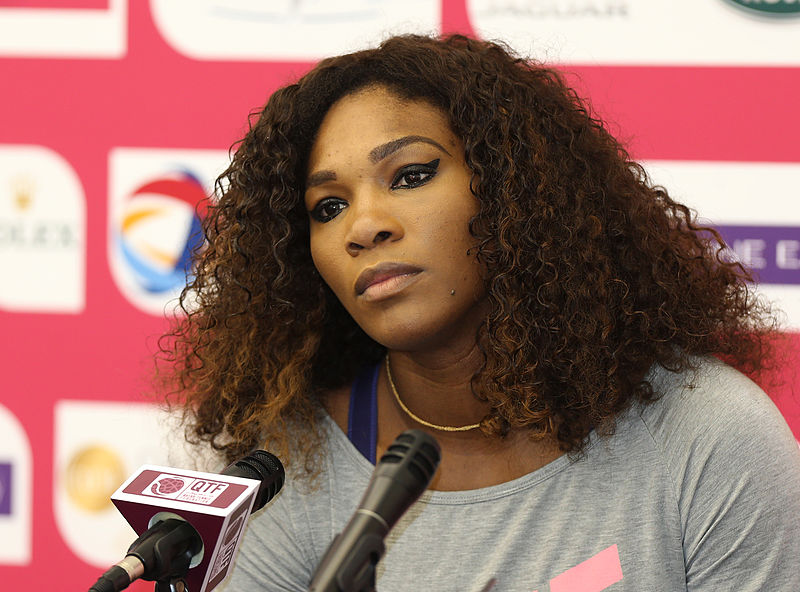 You could see that throughout the intense exchanges, Serena was trying to grasp any opportunity to take the moral high ground. She did this knowing that a home crowd would support her no matter what.

She did this in two ways: firstly saying that a man wouldn’t have to go through what she was going through and secondly, bringing her daughter into the argument.

Serena’s opinion of herself, of being above umpires and officials, was no more evidently shown than when she blurted to Ramos:

“You will never ever, ever, ever be on another court of mine as long as you live”

Sorry Serena, you don’t own the court.

No one is above the sport.

The actions of Serena Williams are far from the example you expect the GOAT to set to the millions of women around the world who idolise her.

One of these countless women is Osaka herself. When she was growing up Osaka idolised Williams as a huge role model and inspiration. Osaka even said that when they met at the net after the match was won, she felt like a little kid again looking up to her idol.

As Japans first ever Grand Salm winner, Osaka didn’t imagine lifting the trophy with tears streaming down her eyes and the stadium full of people booing her. The worst part though, was that her idol caused it all, literally ruined her dream, and still hasn’t even had the decency to say sorry.

Fortunately, I think most spectators can see through Serena’s attempts to come out of this with the moral high ground.

Fortunately, we have found a true champion.

Osaka seems to be the forgotten woman in all of this.

Yes, there were two women on the court that night.

One tarnished herself and the sport, the other played by the rules.

Osaka was the epitome of a true champion. Throughout the whole ordeal, the likes of which have never really been seen before, she kept focused, determined, and level headed. She ran Williams all over the court and was always going to emerge victorious, no matter what Williams did.

Even with the whole crowd booing during her trophy ceremony Osaka was the one that apologised:

“I’m sorry it had to end like this. I want to say thank you for watching the match.”

I for one am going to follow Osaka’s progress keenly over the coming years. Not only because she is an extremely gifted sportswoman, but because on the biggest night of her life, when her idol and opponent tarnished herself and the sport, Osaka showed true class and maturity light years beyond her 20 years, and the GOAT.

Copenhagen: What the Danish Capital Has to Offer

2 thoughts on “We all Know Serena Owes the Apology.”